We had a brilliant time at Buckingham Palace watching the changing of the guard. We’re sure the Queen was looking at us from an upstairs window.
Then we visited the Churchill War Rooms. They were underground and Churchill and his War Cabinet made all the decisions about WW2 from inside them. They used used from 1940 until the end of the war. 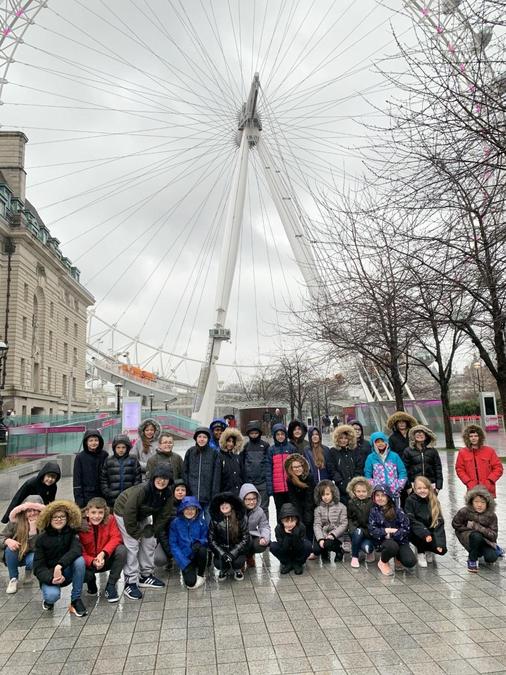 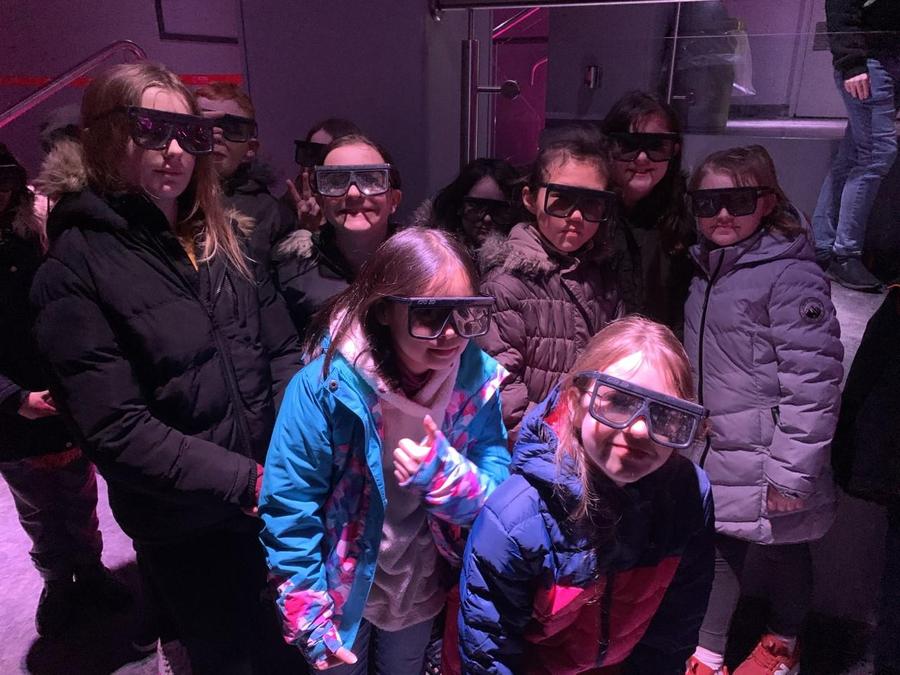 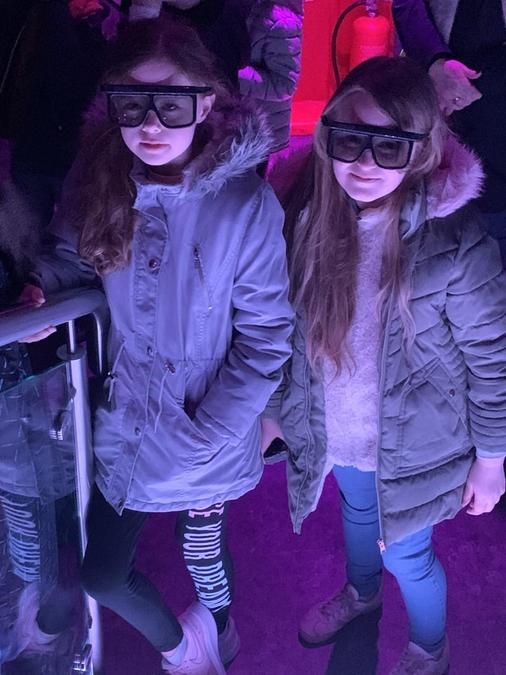 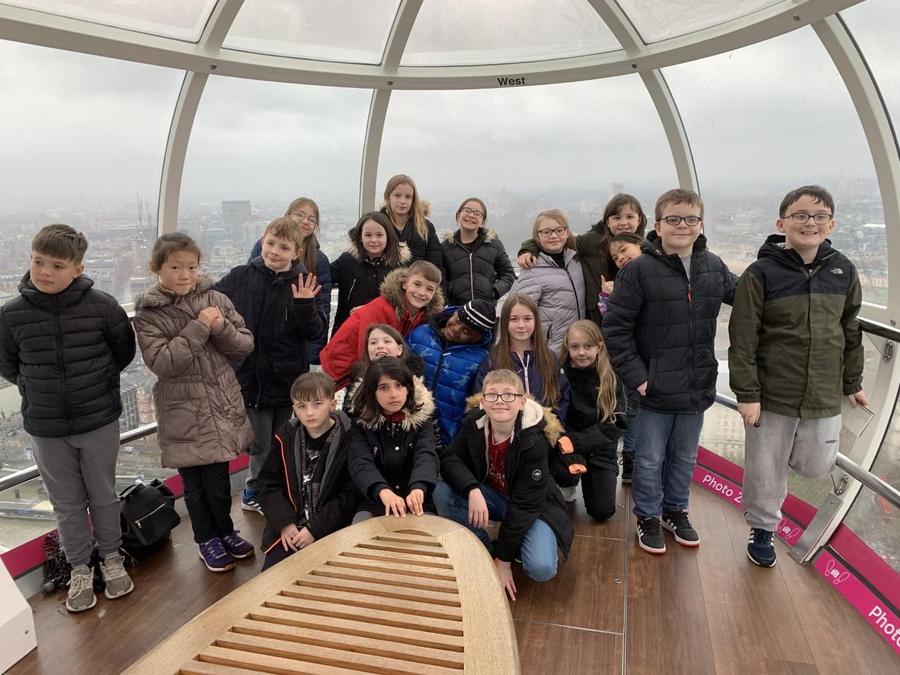 We thought the Lion King was brilliant last night. The theatre was massive and we couldn’t believe how good the animal costumes were. The giraffes were people but they had really long legs. We thought it was very dramatic when Scar killed Mufasa because it looked like he really fell into a herd of buffalo. Everyone loved the songs too.

Today we have really enjoyed exploring in the Science Museum. Miss Callaby’s group loved testing out the different experiments. Mrs Meston’s group enjoyed the different slides. Miss Warren learned how a pulley works by moving herself up and down on a chair. Mrs  Dunning took lots of photos to use back at school.

We have seen London from above now because we have all been on the London Eye. We loved looking down and spotting the different landmarks we have learned to recognise in this busy city. We can’t wait to tell you about everything we have been doing.

We arrived in London and drove straight to the River Thames to find the HMS Belfast warship. It was used in WW2 and now it is a museum to show everyone what it was like being a sailor in the war. We went up and down ladders to see the guns, the engine room and loads more. Then we drove to the hotel. It has just been redecorated so our rooms are so smart. We can’t wait to sleep in them!  We are looking forward to seeing the Lion King first though. We will let you know what it is like in our next blog.

The final week of the half term has been a very busy one, as usual!

The class took part in their ballet workshop on Monday practising their mindfulness and warm up routine. They are very much looking forward to starting the creative stage of the programme after half term when Keisha will be bringing a pianist into school to accompany the sessions.

On Wednesday, year 5 joined year 6 to showcase their learning about famous Black Victorians for our Black History Month assembly. We shared their acrostic and Kenning poems about Mary Seacole, Arthur Wharton and Samuel Coleridge-Taylor. They sang the song, 'I'd like to Teach the World to Sing'.

On Tuesday we had a fantastic visit to the Industrial Museum. We spent the day in role as poor Victorian children to experience what life was like in Victorian Leeds. The Victorian school room workshop was very interesting as the teacher was extremely strict. The children took part in a typical day and learned the three R's, used ink and dip pens to complete handwriting in a copybook, did drill exercises in the yard and completed an object lesson. In the afternoon, they were sent to work in the mill and discovered just how hard life was for working children. They were shocked to discover the dangerous jobs and dirty conditions they endured. It was a brilliant visit and really enhanced the children's understanding of the period.

This week we enjoyed their first session with Keisha from the Northern Ballet Company. She guided the class through a mindfulness activity then we learned how to do a series of ballet moves which will form the warm up to each session. The children learned how to stretch, travel, move, turn and do plies to music. They worked individually and with a partner. Everyone was very engaged throughout the session and we are looking forward to session 2 next week!

In history, the children learned about the expansion of the British empire during the Victorian period. They used maps to locate the countries and researched when they became part of the empire and why.

Wednesday was our annual 'No Pens Wednesday' where we welcomed parents into school to join us in a range of exciting speaking and listening activities. Throughout the morning the children practised these skills by playing different maths games in the classroom.  Mrs Shaw and Mrs Giles led team building and trust exercises in the hall where the pupils had to rely on their communication skills to successfully complete different tasks. We particularly enjoyed the range of sports activities led by Tom and Mr Walton on the playground.

In English this week, the pupils compared the film version of Oliver to the classic novel. They then began to investigate the features of play scripts and planned how to turn a chapter of the story into a film script. They are looking forward to writing their own play scripts of the scene where Oliver meets Fagin for the first time next week.

In maths, the children had a very successful week using the column method for addition and subtraction of more than 4 digits and used rounding for approximating and estimating. They then applied these skills to different reasoning and problem solving activities.

During their history sessions, the class used a variety of different sources to research Queen Victoria and her reign. They focussed on what she did during her time as queen and if she was a good queen as these were questions they generated during the launch session.

Class 12 have settled back into school very quickly, showing their enthusiasm and willingness to learn following the summer holidays. As a new member of staff to the school, Miss Warren has been very impressed by their sensible attitudes, interesting ideas and how they have adapted to their new classroom, teachers and routines.

We started the week with a Street Dance taster session led by the Leeds Rhinos where they learned a short dance routine. The moves had fun memorable names like the penguin and the duck! The class then performed the sequence to each other in a boys versus girls dance off finishing with a funky pose. The coach Nicola was very impressed with their moves and engagement in the session.

Class 12 started to read the classic novel 'Oliver Twist' by Charles Dickens as part of our topic, The Victorians. They used drama techniques such as conscience alley and freeze frames to explore the thoughts and feelings of a range of characters at key points in the story so far.

In maths, the children have been doing lots of place value activities exploring numbers up to 1 million. They also looked at ordering dates, using dates of famous inventions from the Victorian and successfully converted these to Roman numerals too.

Next week, the children will take part in an exciting launch lesson for their history work.